We're busy doing nothing, working the whole day through..

Two months since the last post!  Geez how did that happen?

There's been lots of little bits of work done over the last two months, though nothing major completed.  Most of the focus has been on terrain for Paradiso, though with the usual goldfish attention spa... oh look here's another cool widget to work on.

We have some bits to finish off the Industrial terrain, including some custom made MDF blockhouses produced for us by the wonderful Mad Mecha Guy.  Though rightly best known for his fantastic 15mm Sci Fi terrain, these days Joseph seems to be producing just as much for 28mm, including several bits that will work for the modern era.  We had a load of his shipping containers, and when we asked him if he could modify the design to turn them into the sort of temporary office or blockhouse buildings you see on industrial or building sites, he was happy to oblige.  While not-quite table ready, they are coming together splendidly and are exactly what we wanted.

Another Mad Mecha Guy production I have actually completed is the Monorail Cargo Depot, a birthday present from Mi Hermano di Regalo, Jonesy.  Leaving out the monorail part itself for now, it works just fine with the infamous Poundland train track.  It's certainly a lot more complex to build than the container boxes, quite the engineering marvel in fact, the way the crane can slide around.  I'm sure some enterprising soul would be able to make the crane actually raise up and down with a little effort, but I'm happy with it as-is.  I'm planning on using this in the Halloween game, so expect pictures soon.

Much as I admire the Mad Mecha Guy's stuff, I've fallen in love with the mdf buildings and accessories sold on eBay by TheTrollTrader under the TTCombat brand.  They use 3mm MDF almost exclusively, which means their designs are a bit chunkier than other MDF manufacturers, but their prices are absolute bargains.  I picked up the basic Apartment Building kit, which is currently selling for £13.95.  Although it lacks any interior, it's half the price of the equivalently sized City Block Residential building from Sarissa Precision.  They definitely seem pitched towards giving you the most bang for your buck, producing large, externallly impressive buildings at low prices by sacrificing the interior detail.  They also produce several large "skyscraper" type buildings, aimed primarily at players of the Batman miniatures game (and any other Superhero games, I imagine).  But they also produce a number of small accessory packs as cheap as £3.95 that are excellent for building up the amount of clutter terrain on your tabletop.  Again, photos will be coming when I've got something table-ready.

After the Industrial terrain is finished off, the next phase of the Paradiso project is to produce some more run-down looking buildings for the more rural settlements.  One of the sources of inspiration I'm using for Paradiso is the original Just Cause computer game, which has rural villages looking something like this... 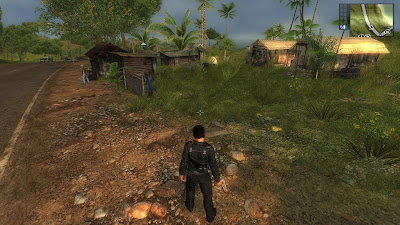 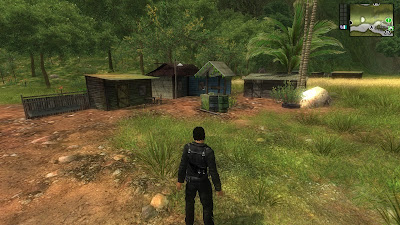 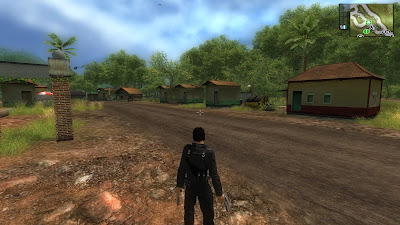 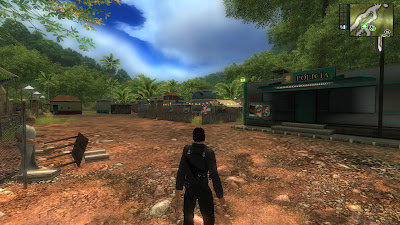 You can see, they cover quite a range, from one room wooden huts to maybe two or three roomed plastered bungalows.  I rather like the overall eclectic effect and I'm looking to copy it for villages for Paradiso.  I've knocked up a few scratchbuilt huts from Balsa to get a feel for the lower end of the spectrum, the slighly better quality houses will probably be similar simple box builds with foamcore.  For the town market I've got some excellent market stalls from TTCombat (again at £3.95 for two stalls, it's hard to say no) and the larger public buildings like the police station will probably be Plasticville conversions.  A spare gas station is well on the way to being converted to a run-down village general store and I have a couple of other kits earmarked for this stage of the project.  Meanwhile Jonesy has been working on the Trailer park kit (ironically, the trailers are actually several times bigger than the smallest hovel huts, pushing them towards the "luxury home" end of the rural spectrum)

Way back last year when we first started mooting the Paradiso project, Jonesy bought me the Sarissa Precision Mission Church kit, which will be the centerpiece of many rural village layouts.  I've assembled this, and like everything else in this project it's currently about 90% done.

Let's not even talk about the old built up and broken Frosty Bar that I've restored on a whim.  Again... yes you've guessed it, it's about 90% done, just needs some finishing touches.... Hmmm maybe there's a pattern forming here?

Anyway, since our regular monthly RPG session happens to fall Halloween night, I've persuaded my regular players to forgo the regular superhero RPG in favour of a tabletop game on the big wargame table.  This serves as an excellent encouragement for me to have to clear it up from the junk-cluttered workbench it always seems to turn into between games, and make the gaming room fit for gaming in.
I'm going to try and use a few of the new terrain pieces in this game, maybe use the game as motivation to finish off some of those last 10%s.

Of course, since the game's going to be Hillbillys Vs (xxxx), neither my old European style church nor the new Mission church will be entirely appropriate for the "classic Americana" scenery.  I'm sure there was a church or two in the box of Plasticville buildings awaiting restoration..... Hmmm I think I feel another new (and urgent) project coming on!
Posted by Dr Vesuvius at 14:42 1 comment: